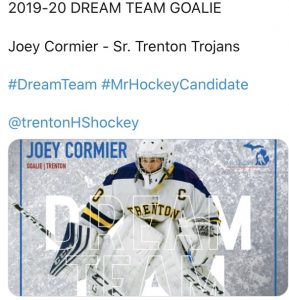 The state’s annual “Dream Team” consists of 3 Forwards, 2 Defensemen, and 1 Goalie featuring the best of the best.

Joey went 20-6-1 between the pipes for the Trojans this season against the state’s toughest competition while compiling a 1.63 Goals Against Average (GAA) and a .942 Save Percentage.

Other Awards were also given out earlier this week to our players:

Congratulations to all of our Trojans with these awards!